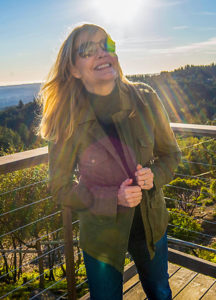 Bio:
As a Pulitzer Prize-winning editorial and commercial photographer, San Francisco-based Deanne Fitzmaurice is most known for her unique ability to go behind the scenes to discover and convey personal, intimate and emotional stories through images. Fitzmaurice, a Nikon Ambassador, is an assignment photographer with publications including Sports Illustrated, ESPN, National Geographic and many other respected outlets. Deanne has also partnered with foundations and non-profits including the Bill and Melinda Gates Foundation and the Lucile Packard Foundation. Deanne’s commercial clients include Apple, Nike, Google and Facebook.
In 2011, Deanne’s documentary work was a finalist for the Alexia Foundation Grant for World Peace. In 2011, 2013, 2015, and 2017 she was presented with the American Photography Awards and in 2013 her work was selected for Communication Arts Photography Annual. Deanne’s work has also received awards from Pictures of the Year International, NPPA Best of Photojournalism, and the Casey Medal for Meritorious Journalism. Her work is part of the permanent collection at the Newseum, and is also part of their traveling exhibition of Pulitzer winning photographs. Deanne's work has also been exhibited at Visa pour L’Image in Perpignan, France, and with UNICEF Photo of the Year. In 2010 Deanne partnered with writer Joan Ryan and published Freak Season, documenting Tim Lincecum's road to The World Series. She has also been a contract photographer for the best-selling Day in the Life books.
After earning a Bachelor of Fine Arts from the Academy of Art University, she began her career as a staff photographer for the San Francisco Chronicle. When not on assignment, Deanne often lectures and teaches workshops. She is proud to be a Nikon Ambassador and the co-founder of Think Tank Photo, with her husband, photographer Kurt Rogers.
Deanne is represented by National Geographic Image Collection and Novus Select. Learn about Deanne's approach to photography at Digital Photo Pro and CreativeLIVE.

Topic:
The Storyteller’s Creative Journey
Deanne is going to take you on a journey from her early days as a staff photojournalist at the San Francisco Chronicle to her work today as a Visual Storyteller. She’ll share with you some lessons learned and pivot points with it all leading to the backbone of her work –– building relationships and trust with the goal of shining a light through Storytelling.