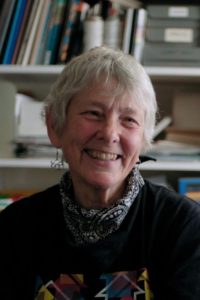 In conjunction with the Rehoboth Beach Film Society and Altavod Virtual Cinema the CCC is offering for the 1st time a movie streaming event and a Happy Hour movie discussion. The RBFS will benefit from your viewing this movie and we are excited to be able to support the theater in this time of social distancing during the pandemic

A portrait of trailblazing graffiti and street photographer Martha Cooper

Martha Cooper is a documentary photographer who has specialized in shooting urban vernacular art and architecture for over forty years. In 1977, Martha moved from Rhode Island to New York City and worked as a staff photographer at the NY Post for three years. During that time she began to document graffiti and B-Boying, subjects which led to her extensive coverage of early Hip Hop as it emerged from the Bronx. These photos, published worldwide, helped make Hip Hop the predominant international youth movement it is today.

Her book Subway Art (with Henry Chalfant) has been in print since 1984 and is affectionately called the “bible” by graffiti artists. Her next book, R.I.P.: Memorial Wall Art looks at memorial murals in NYC and Hip Hop Files 1980–1984 contains hundreds of rare, early Hip Hop photos.

We B*Girlz is an intensive look at girls and women who breakdance worldwide, and Street Play and New York State of Mind are her collections of NYC photos from the late ’70s. Tag Town shows the evolution of graffiti style from early tags to complicated pieces. Her books Going Postal and Name Tagging contain of images of graffiti and street art on postal stickers. Remembering 9/11 captures the variety of spontaneous memorials that sprang up in New York after the attack on the World Trade Center. Tokyo Tattoo 1970, published in 2011 by Dokument Press in Sweden, showcases photos she took while living in Japan in the ’70s.

Martha’s work has been exhibited in museums and galleries worldwide and published in numerous magazines from National Geographic to Vibe. She still lives in Manhattan but travels frequently to urban art festivals around the world. Recently Martha has documented street artists painting in Wynwood, Miami and at the Houston/Bowery Wall in NYC.

She also completed shooting a project comparing SoWeBo, a neighborhood in Southwest Baltimore, to Soweto, South Africa. Her most recent book, One Week with 1UP is a collaboration with Nika Kramer and the notorious graffiti crew in Berlin. A documentary film Martha Cooper: A Picture Story by filmmaker Selina Miles had its premiere at the TriBeCa International Film Festival in 2019 in New York City.

A Zoom Happy Hour discussion is scheduled for March 26th  between 5:00pm - 6:00pm for those who would like to attend to discuss the movie.  Bring your favorite beverage and a few appys and be ready for a discussion about Martha and the movie!

The Zoom link to register for the HH discussion is immediately below:

Register in advance for this meeting:

After registering, you will receive a confirmation email containing information about joining the meeting.