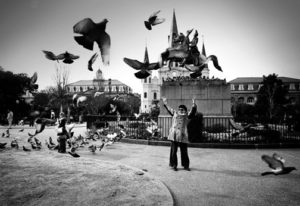 Chris Harris was late to join academia.
For over twenty-five years he worked as a freelance photojournalist for major news media worldwide. From his base in New Orleans he photographically documented the news of the world for TIME, Life, Newsweek, the New York Times as well as many other major publications. Professor Harris is well known for his diversity of work. Whether it was the “Sex in New Orleans” coverage for Playboy Magazine, his coverage of Presidential candidate Jimmy Carter for Newsweek, his extended (14 page) essay on bullfighting for Sports Illustrated,Tennessee Williams for People Magazine or Walker Percy for Esquire, Harris has met the needs of publications worldwide. From the late 1960s to the early 1990s he specialized in covering Central America as well as the American South. His work was represented worldwide by GAMMA/Liaison agency in Paris and New York.
Since coming-in from active photojournalism Professor Harris obtained his advanced degree in Journalism from the University of Alabama in order to go into higher education. He is a Professor Emeritus in the College of Mass Communication, Electronic Media Communication Department at Middle Tennessee State University in Murfreesboro, TN. His specialties included photojournalism, media law and ethics and visual journalism.
Professor Harris is the co-author (with Paul Martin Lester) of Visual Journalism, published by Allyn & Bacon, Boston in 200

“The photos are quite lovely and evocative…it is a poetic view…from the inside out.” Novelist Walker Percy on reviewing Harris’ coverage of the Natchez Pilgrimage

“I took them (your pictures) home as a Christmas present…(my parents) still talk about that ‘civilized fellow from New Orleans.’” Journalist Bill Moyers

“(Chris Harris’) use of documentary photography as a personal art form has certainly made him an artist of great merit. Mr. Harris’ artwork has enriched our collection.” New Orleans Museum of Art Director E. John Bullard

“When I first met Chris Harris in New Orleans…he was a seasoned, but slightly seedy-looking, internationally known photographer. Think of the photojournalist played by Dennis Hopper in Apocalypse Now Redux, but with a Southern accent, and you know what I mean.” Photo ethicist, and co-author, Paul Martin Lester

“I can’t wait to see what your photographs do to me. Impossible!” Playwright Tennessee Williams